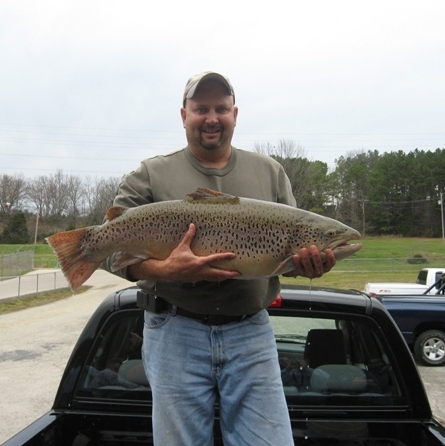 Sandusky, a 49-year-old resident of Arnold, caught his 28-pound, 12-ounce fish on Berkley Power Bait and 4-pound-test line on a spinning rod and reel. The fish - which bore some resemblance to a football - bested the previous record - another Taneycomo fish - by more than a pound. It measured 37 inches from nose to tail.

In September 1997, a Lake Taneycomo angler found a monster brown trout dead near the lake's 18-mile marker. The fish measured 41.75 inches long. Some estimated its live weight at 45 pounds.

Mike Kruse, now fisheries administrative manager for the Conservation Department in Jefferson City, was the agency's trout research biologist in 1997. At the time, he noted that the dead fish could have been a world record. Conservation Agent Quenten Fronterhouse said he has seen larger fish in the Trout Hollow area. Fisheries Management Biologist Shane Bush said Conservation Department fisheries workers have found a number of brown trout weighing more than 30 pounds when conducting electrofishing samples.

"With our annual stocking rate of around 10,000 brown trout a year, Taneycomo should have no problem producing additional world-class brown trout in the future," said Bush.

"There is no telling how many world-class brown trout are swimming around in Lake Taneycomo," said Kruse. "The lake's natural food base is phenomenal, and it has an abundance of deep-water habitat that can hide big fish."

In contrast, anglers are likely to expend lots of energy looking for big browns at Lake Taneycomo, spurred on by Sandusky's success.