SHERIDAN - The cast to catch a smallmouth bass May 12 netted a Sheridan angler a bass and a state record at that - but rather than the familiar smallmouth, it was the sunfish-like rock bass that made history. 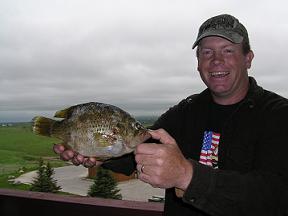 Just as Randy Reece’s night crawler hit the surface on the private pond near Sheridan, he noticed a swirl and hooked the fish. After a quick battle, Reece landed the 1.76-pound rock bass, which unbeknownst to him would prove to be the new state record.

"I had tossed two rock bass back but decided to keep this one only because it had been hooked deep." he said. "A friend said that this was a large rock bass, and I should have it checked out for a state record."

That proved to be an eventful stroke of fate and good advice, because the fish beat the former record by near one half pound. In addition, the 39-year-old hunting outfitter later released an even larger rock bass not knowing he was dealing with epic specimens of the species. The fish he was principally after were also biting, with Reece landing several smallmouth bass from 2 to 3 pounds.

Although called a bass, rock bass more closely resemble sunfish or panfish as evidenced by the record fish measuring 13 inches long with a 12.5-inch girth. Rock bass are easily distinguished from other sunfish by its red eyes.

Reece loves to take his two children fishing. Daughter Jamie was with him when he landed the record bass and couldn’t believe its size. She’ll have frequent reminders of the day, because the fish is already at the taxidermist and will grace the family’s home.

Rock bass have been introduced to several waters in northeastern Wyoming including LAK Reservoir, Lake DeSmet and the Tongue River. The species prefers pools in rubble-bottomed streams but also does well in lakes and ponds. Spawning and food habits - being readily caught on worms and flies - are similar to those of most sunfishes. A Sheridan County pond also yielded the previous state record. Caught June 7, 1996, it weighed 1.29 pounds.

Two anglers share the North American rock bass record with fish weighing 3 pounds even. The latest was caught in the York River, Ontario in August 1994 and the other in Sugar Creek, Ind. in June 1969.